Skip to main content
Cyber Monday is here!
Save 30-65% now through December 5! 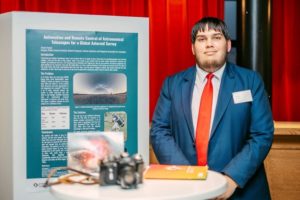 In 2016, Florian Vamosi was a grammar school student who had been using Linux since age 10. Along with a team from his school, he won the innovation competition in his town of Kaposvár, Hungary for a modular agricultural automation system that monitors weather conditions and automatically compensates to suit the needs of a given plant using Raspberry Pis.

Florian applied for and was awarded a Linux Foundation Training (LiFT) Scholarship in the Teens-in-Training category due to his hard work, talents and clear passion for Linux and open source.

We followed up with Florian recently to hear what he’s been up to since completing his Linux Foundation training.

Linux Foundation: What training did you take with your scholarship?

Florian Vamosi: I took LFS201 Essentials of Linux System Administration thanks to the LiFT Scholarship from The Linux Foundation. During the course I learned a lot about how to configure and maintain a lot of tasks, features and programs within an open source environment like Linux and at the same time be confident doing it.

LF: What was the best/most useful thing you learned through this training?

FV: What I think was the most useful thing I learned was the different methods of task automation.

LF: What have you been up to since completing this course?

FV: After the course I successfully participated in the first European Astro Pi Challenge with my team and we had our space experiment fly to the International Space Station. Since then we have participated each year, and now our third experiment is gathering data on the ISS.

LF: How are you using open source in your activities?

FV: In 2019, with my open source-based and soon-to-be open sourced project, “Automation of Astronomical Telescopes for a Global Asteroid Survey”, I won first prize at the 28th Hungarian Competition of Science and Innovation for Talented Youth, and as a result I participated in the European Union Contest for Young Scientists 2019. I always try to promote open source in Hungary through the media response to our project, with good success so far.

I was also selected as the Hungarian Association for Innovation representative at the Stockholm International Youth Science Seminar 2019, which is a gathering of 25 young scientists from all over the world, during Nobel Week in Stockholm. As a participant I was lucky enough to give a panel talk to more than 800 Swedish students about the inspiration for research. The week ended by visiting the Nobel Prize Award ceremony and the Nobel Banquet.

LF: What are you focused on currently?

FV: Nowadays I’m a physics undergraduate at the University of Pécs in Hungary and actively working on my research “Orbital Computation of Near Earth Objects with a Network of Automated Telescopes”, supported by the ÚNKP-19-5-PTE-457 “New National Excellence Program of the Ministry for Innovation and Technology”. This project is based on my own, to-be open sourced and released telescope automation system and orbital computation software. During my research I also contribute a lot of testing time to the Kstars planetarium software and the INDI Open Astronomy Instrumentation projects, and actively report bugs to the developers.

Me and my team have also been working on raising funds for our early phase startup “Ultimate Waterprobe”, which is a device and web platform dedicated to preventing mass fish kills in aquacultures. We actually succeeded and received a pre-seed investment from Hungarian venture capital firm Hiventures and Quantum Leap Incubator, through the startup programme of Startup Campus and the University of Győr. We are currently in talks to join the Startup Campus x Tungsram accelerator programme.

2020 LiFT scholarship applications have closed, and winners will be announced in late June.