Join kernel maintainer James Bottomley as he introduces you to Git, the version control system designed by and for the Linux kernel development community.  Learn about the history of Git and some of the basic functionality, including a brief demo. 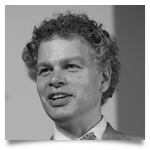 James Bottomley is an active member of the open source community. He maintains the SCSI subsystem, the MCA subsystem, the Linux Voyager port and the 53c700 driver. He was born and grew up in the United Kingdom. He went to university at Cambridge in 1985 for both his undergraduate and doctoral degrees. He joined AT&T Bell labs in 1995 to work on Distributed Lock Manager technology for clustering. In 1997 he moved to the LifeKeeper HA project. He has spoken before at LinuxWorld, Usenix ATC, ALS, OLS and the Kernel Summit. James is also a member of the Technical Advisory Board of the Linux Foundation.