Skip to main content
CYBER MONDAY IS HERE! SAVE UP TO 65% ON TRAINING AND CERTIFICATIONS. VIEW DEALS NOW!   LEARN MORE
Close Search

To kick off our ‘Meet The Community’ series, we asked Behan Webster, one of our team’s most senior members, to tell us about his education and career background along with some of the things he enjoys pursuing in his spare time.

I started my career in Telecom at Bell Northern Research in the early 1990s after receiving a degree in Computer Engineering from the University of Waterloo.  Soon afterward, I got the bug for startup life. I worked for companies I helped to start as well as other startups which lead me finally into Consulting work. My work was primarily on operating systems, firmware, tools, and manufacturing, with various projects across many jobs in the fields of telecom, datacom, optical, wireless, business logic, medical, automotive, defense, and even a games company for a few years.  I have worked on a breadth of hardware, from tiny devices up through to very large embedded systems.

“My diverse experience taught me that in the world of reliable systems with long support times of 10-40 years, there were more similarities than differences in these disparate industries.”

I left the university with a love of UNIX, and having just discovered Linux in my last year of university, I set up my first server in my bedroom with a second phone line and 33k baud modem to provide an internet mirror. After using SLS and Slackware, I discovered Debian and have been using it ever since. I became a Debian developer soon afterward and helped out on some of the early work for the apt-get program. Over the years I’ve made small contributions to various projects including avahi, lessfile/lesspipe, fileutils, LLVMLinux, the Linux kernel, and a number of embedded Linux products.

Despite using UNIX (Solaris/hpux) officially in my first jobs, like so many early Linux developers, I always had a Linux box under my desk to get my work done. In later jobs, where I was hired to work on Linux drivers or build embedded Linux systems, my inevitable Windows workstation was always reinstalled with Debian on day one so I could do the job I was hired for (to the chagrin of local IT).

I now run an Embedded Linux Consultancy (Converse in Code Inc) though I also write and maintain Embedded Linux and Kernel related material for the Linux Foundation Training group. I am also one of their instructors and love to be sent to travel the world to empower teams of engineers at disparate companies to build both wonderful and mundane things with my favorite Operating System.

I have lived in various places across Canada and Europe and have been fortunate to have traveled around the world, however, I now live in the City of Victoria on Canada’s West Coast. Unlike the rest of Canada, Victoria has a very moderate climate year round which doesn’t get too cold or too hot. This allows for things like kayaking or cycling year round. My wife, who amongst other things runs an online Art therapy school, and I along with our Poodle named River, are slowly exploring Vancouver Island and the West Coast. I also love to build things in my spare time and am always trying to find more time to spend in my woodshop or working on my many computer projects. 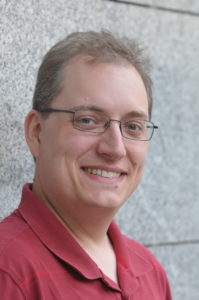